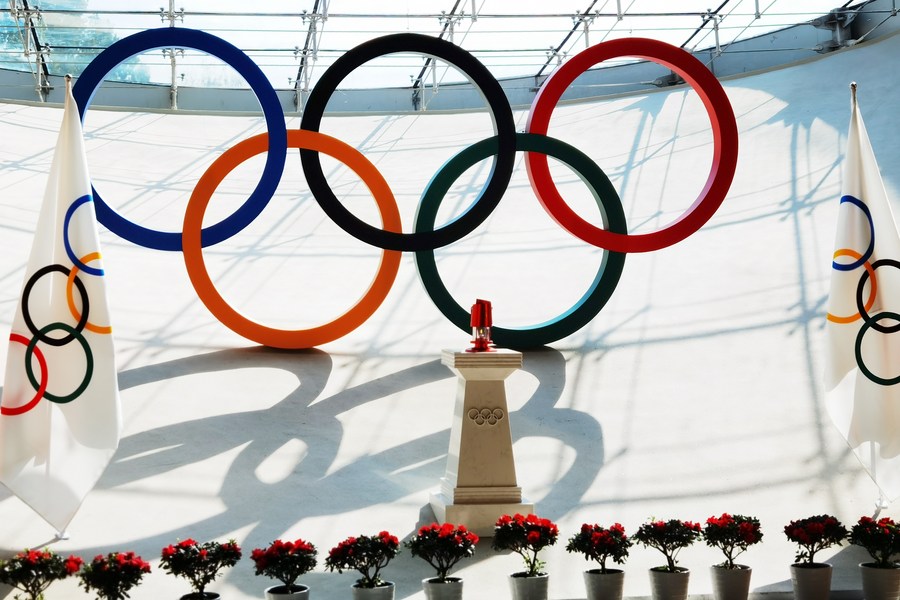 The Olympic flame for the 2022 Winter Games on display at Beijing's Olympic Tower. (Xinhua/Wang Yong)。

BERLIN, Dec. 8 (Xinhua) -- International Olympic Committee (IOC) President Thomas Bach said on Wednesday that the 2022 Beijing Winter Olympics should not be used to raise global tensions and the athletes' participation is worldwide consensus.。

Bach expressed concerns about the athlete's participation after the United States announced not to send government officials to attend Beijing 2022 under the pretext of human rights. He welcomed all the support for the Olympic teams to give athletes certainty at the digital press conference after the IOC Executive Board meeting on Wednesday.。

"This is in full accordance with the approval by consensus of all the UN member states supporting the Olympic Truce Resolution," said the 67-year-old president. "The presence of government officials is a political decision. Political neutrality applies and IOC won't take a side."

According to Bach, IOC organizes the Games to unite the world, not to divide it. He took the Olympic Games in ancient time as an example to prove that political intervention would only destroy and bring the Games to an end.。

"We are living in this confrontational, divisive world where the tensions are rising high. If the games would even contribute to the tensions, it would be absolutely contrary to our mission," said Bach.。

Bach believed the IOC's mission and responsibility is to ensure everything related to the Olympic Games and the Olympic Charter and there is no doubt that the Chinese partners would deliver the commitments like what they have achieved in the testing events.。

"The host contract is fully respected. It includes the respect for human rights of all the participants and a number of other issues. And on this, we are working closely with the organizing committee," said Bach. Enditem。

ANCIENT OLYMPIA, Greece, Oct. 18 (Xinhua) -- The Olympic Flame that will be burning for the Beijing 2022 Winter Games was ignited on Monday at the birthplace of the Games in Ancient Olympia, Greece.

During the traditional ceremony, actress Xanthi Georgiou in the role of an ancient Greek High Priestess used a concave mirror to focus the sun's rays and light a torch before the 2,500-year-old Temple of Hera, a goddess in ancient Greek mythology.

At the end of the ceremony, the High Priestess will hand over the flame to the first torchbearer, Greek skier Ioannis Antoniou, inside the stadium which hosted the first Games centuries ago.

Following a short symbolic torch relay, the flame will be transferred to Athens to be passed over on Tuesday to the organizers of Beijing 2022.

The XXIV Winter Olympics will take place from February 4 to 20, 2022, followed by the Paralympics. Enditem

SHANGHAI, Nov. 25 (Xinhua) -- The Shanghai Data Exchange was established on Thursday and began trading on the same day.。

A total of 20 data products were listed on the opening day, covering eight categories such as finance, transportation and communication.。

The first Shanghai data transaction expert committee, composed of 31 experts in the fields of legal compliance, financial transaction, data industry and data security, was also set up on Thursday.。

The expert committee will supervise the trading operation. Enditem。